The current state of ICOs: The token economy in Q1 2018

The current state of ICOs: The token economy in Q1 2018

ICOs mainly came out of their adherence to tech experts in early 2017. How did the method of raising funds develop in roughly one year till the first quarter of 2018? A quick overview.

(This post ist just an excerpt of the report. You can download the quick report for free)

Looking at the amounts of capital raised trough ICOs, it can be clearly stated that the token based funding method is playing a significant role in the market. In December 2017 ICOs outperformed early-stage VC investments according to the raised amounts of money. You can find the details in the study you can download with the link below.

Tokensales: projects are getting widespread

Financing a business with the use of tokens became increasingly popular in the previous months. Instead of being restricted to very technical projects and new general Blockchain platforms, more and more startups and companies are facilitating this fundraising method. Blockchain technologies in general are getting a step closer to being applied in real-world scenarios and new use-cases being developed on it. Understanding ICOs as a general fundraising methodology that is not limited to Blockchain-heavy projects is the right direction in my belief.

Although the market of tokensales seems to be characterized by many good news, higher invested amounts and more projects, there are some less well developments they have surpassed. A figure that is rarely referenced is the proportion of projects that actually reached their fundraising goals or failed the campaign. The amount of failed project has heavily increased during the last months, being grounded in not reaching the minimum goal of raised capital (the soft cap) of an ICO.

Since successful tokensales are much more visible than the ones that reasonably don’t prone to haven’t achieved their goal, the real numbers are hard to determine. Although, it was found out in a study that classified all ICOs that reached less then 75% of their target as failed, that for example in September 2017 more than 60% of the tokensales were not successful. 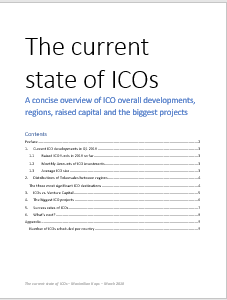 This is not investment advice. The information presented here only serve for information purposes and should not be considered as any consultancy or advice. They are based on subjective opinion